Over the past few days I have been trying to create/run a project in Eclipse using the gwt-maven-plugin and keep running into roadblocks (see some of my previous questions). I like to use Maven to do my builds, but I’m at the point where I’m thinking of going the Ant build route because of the complications of using Maven.

Does anyone out there have it configured/working well? Is it just me or is this harder than it should be?

After much frustration trying to get things to play nicely together, this is the setup I have that “works” for me. “Works” meaning that I can create, run and debug a GWT project with tweaks, but it isn’t the most elegant solution.

Much of the steps are the same as Pascal’s answer in this post: Maven GWT 2.0 and Eclipse. I’ll list mine out to be clear.

In Eclipse (Helios) with m2eclipse and GWT Eclipse plugins installed:

I created a Run Configuration that does mvn clean compile gwt:run. The gwt:run is necessary to copy the resources and lib jars into the war directory. However, it does not copy the web.xml from src/main/webapp/WEB-INF into war/WEB-INF/. So, I have to manually copy that file.

If I want to run my application, the above step is sufficient. However, if I want to debug the application, I launch it by choosing the Google “Web Application” configuration from Debug Configurations that was created when the .launch file was copied previously. This configuration allows for debugging (breakpoints etc.) without any other config or need for remote debugging.

I was wondering if there is a similar hex (x) escape in Java like there is in C++. For example:

There is no hex (x) escape in Java from what it appears so far. Is there an alternative that is just as easy to use without having to concat a bunch of hex numbers together?

Strings in Java are always encoded in UTF-16, so it uses a Unicode escape: u0048. Octal characters are supported as well: 110

Here is a good primer on Hashcode and article on how hashing works that I found (C# but the concepts are transferrable): Eric Lippert’s Guidelines and rules for GetHashCode()

Because you want the number you are multiplying by and the number of buckets you are inserting into to have orthogonal prime factorizations.

Suppose there are 8 buckets to insert into. If the number you are using to multiply by is some multiple of 8, then the bucket inserted into will only be determined by the least significant entry (the one not multiplied at all). Similar entries will collide. Not good for a hash function.

I’ve been doing some usability testing on a website I’m developing, using an Android phone and an iPod touch. In both cases, when entering a numeric field (time, distance in metres, etc) I have to take a manual step to change the keyboard layout to show digits. As the app will only accept numeric values in the textbox, I’d like to save the user the inconvenience and tell the device “switch to the number pad for this input”.

After some browsing, it seems that HTML 5 offers some answers for this, though they’re not widely supported. 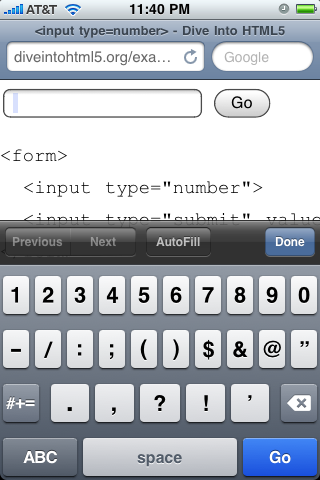 It’s a pretty common algorithm in command line parsing. Given a set of predefined long option names — compute the shortest prefix that uniquely identifies one of these options. So for instance, for the following options:

This would be the output:

I’m thinking two possible ways of doing this — either as a tree:

Or by searching for substrings:

The “tree” solution is a special case (well, actually it’s pretty general) of a Patricia trie.

The first will generally be faster to lookup. The memory considerations probably aren’t relevant to your context, since it’s not permanently used and you’re only performing the “lookup” once.