I’ve been following the best practices for creating layouts for differing screen sizes as per this guide: http://developer.android.com/guide/practices/screens_support.html

Can any one help with how I am supposed to make those pixel values (60/120/etc) in to density pixels so that the line is scaled correctly? Otherwise the line will not appear as I intend, it’ll be too far down and too long on smaller screens for example.

Thanks for any replies.

I missed it the first time going through the Android document; the necessary info is in section “3. Do not use hard-coded pixel values in your code” of the link in my original post.

I am trying to build a form that fills in a person’s order.

What I’m trying to do is send in the select object, pull the name and the text/value from the option menu AND the data in the option tag.

I can get the name and the option value, but I can’t seem to get the text=”” or the value=”” from the select object. I only need the text/value from the option menu the user selected. I know I can place them in an array, but that doesn’t help

I also need to use the passed in select reference as that is how it’s set up in the rest of my code.

Later on, that text/value is going to be used to pull the XML document that will populate the next select form dynamically.

I’m using the Play! framework and I have a model (an Entity) that has a variable of type Map.

To make some tests, I load a YAML file every time I start the application, but I don’t know the syntax to define a Map.

Let’s say I have this class

What would my YAML file look like? I tried this:

This is one of my many tries. I don’t know the syntax and I can’t find it on the Internet. I think the Play! uses SnakeYAML as YAML parser.

In the doc I found some examples, but none of them will work.

In my application, everything works except that the Map variable (arg3 in the example) has a size of 0 element.

According to this thread on Google Groups it appears that the syntax you need is to use a question mark.

The thread has a working map in the following syntax.

So, I guess your example would be

I have tested this however and it does not work! I would suggest raising a bug to take a look into this, because all documentation points at this being correct.

I’m trying to use a SeekBar to display both the length of a track played by a MediaPlayer class and to enable seeking within the track.

Seeking within the track works well. However, updating the progress value using setProgress while the track is playing seems to cause a slight skip.

In the onCreate method I create a Thread with a loop which updates the SeekBar’s progress value for the current track. This loop resets when the track is changed.

Ideally I would rather not use a thread as I understand that this has disadvantages. Also please excuse the exception swallowing – it is difficult to keep checking for all MediaPlayer states in response to UI events. However, my real problem is that the music is skipping.

Could anyone suggest an alternative way to update the progress and explain why the call to setProgress is causing the track to skip even with the use of a seperate thread?

I think the problem is that when you call the setProgress(), the onProgressChanged event is fired.

The listener (OnSeekBarChangeListener) have a method public void onProgressChanged(SeekBar seekBar, int progress, boolean fromUser). Here you should test if the listener was fired by a user action or from code. In your case, the fromUser variable should be false.

And the installed .apk ( installed by Eclipse ) should be removed manually?

You can do this by going to the Debug perspective, right clicking your application, and selecting “Disconnect” or “Terminate”. 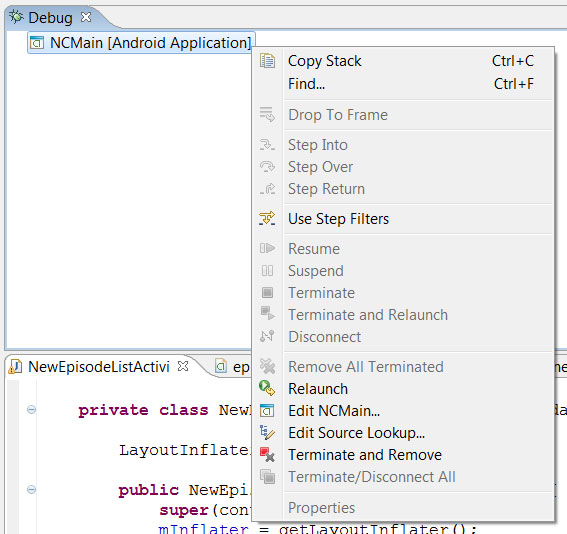