I am having a problem doing a loop in mustache. Basically a usr has the ability to add options to products. Each option can have more then 1 choice. Also they come together Choice Name + Price. I get the following error:

I think I can’t achieve the correct format for the choices object. What am I doing wrong?

Also, in constructing choices, you’re overwriting each object — I think you want to push each one to the array. Try this:

If I am building an application in Eclipse using Java, and I want this application to read from a txt file, where should I put the txt file in the package in order to not have to specify its path (so that I can just say “file.txt”). I thought that it was supposed to go in the src folder, but it’s not working.

I’m working on an Android project, in which I need to load some images to a GridView. The images could be in the cache, if cache missing, then query the Internet server. My design is to use two threads to do the loading task. One thread for reading cache and one thread for downloading. So there are 3 threads including the UI one. Each of them has its own message queue and uses Handler to communicate.

My question is whether I should use bound service in this situation instead? Actually I have realized the design above and it seems nothing wrong but GC is working very hard, which can be inferred from the logcat.

Another issue is that several threads exist when I use DDMS to monitor the threads. This is because the same loading mechanism is used in several Activities. I have let the threads quit its message loop while onPause() is called, I’m sure only two of them are alive in the same time. But I can see all of them in DDMS. (BTW, why the threads still exist? I have let thread = null;)

So in a word, my question is: Could this loading task benefit from a bound service?

So why are you using multiple threads? You need to load an image in the background, and when done, display it in the UI. It really doesn’t matter to the UI where the images comes from. And using multiple threads doesn’t make it faster, just consumes more memory. Just use a single background thread: first it hits the cache, then downloads if no hit.

Services are for when you want do something that doesn’t need a UI. If you need to update the UI in real time, a service doesn’t make much sense.

I’m struggling with an issue in my app. I’d like to provide a way to list the history of the previous opened activities.

I think there are two potential solutions but I’m not sure to find a stable way to achieve any of them.

So is there a way to do that using a function from the SDK?

I’ve got another idea, it’s a bit different. Would it be possible to listen to “start/finish activity” events with some kind of receiver to a specific app (mine) and keep track of the stack history?

So is there a way to do that using a function from the SDK?

Would it be possible to listen to “start/finish activity” events with some kind of receiver to a specific app (mine) and keep track of the stack history?

You can use registerActivityLifecycleCallbacks() on Application, if you are only going to support API Level 14 and higher (a.k.a., Android 4.0+).

I am trying to use a SlidingMenu (https://github.com/jfeinstein10/SlidingMenu/) in my app. My first issue was that the project was using MATCH_PARENT, which wouldn’t compile for me. The minSDK was set to 5, and the targetSDK was 17. I tried changing the min to 8, which is when MATCH_PARENT was introduced, to no luck.

After replacing all of the MATCH_PARENT’s with FILL_PARENT’s, which both compile to -1, the project seemed fine. I then proceeded to make it use ABS as per the developer’s instructions on his github. Whenever I reference ABS though, I get many errors such as:

As far as I can tell, SlidingMenu is throwing the error because of some of the XML in ABS, meaning that R won’t generate, and I can’t use SlidingMenu.

Go to the properties . 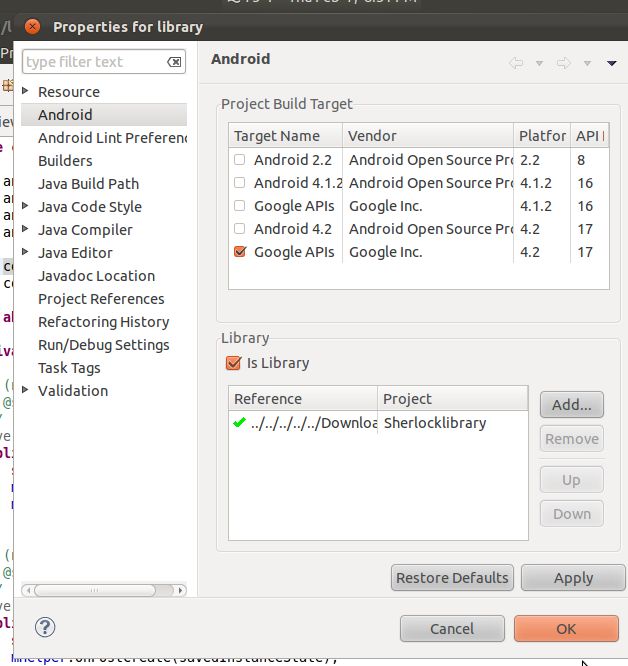 click on the most recent target platform (which also has google maps for mapActivity). In this image its 4.2 Google Apis