I’m trying to store a set of strings using the SharedPreferences API.

The first time I execute the code above, s is set to the default value (the just created end empty HashSet) and it is stored without problems.

How can the second, and elements after that, be stored so they won’t get lost?

This “problem” is documented on SharedPreferences.getStringSet.

That is ok, but the problem comes when you try to store it: Android compares the modified HashSet that you are trying to save using SharedPreferences.Editor.putStringSet with the current one stored on the SharedPreference, and both are the same object!!!

A possible solution is to make a copy of the Set<String> returned by the SharedPreferences object:

That makes s a different object, and the strings added to s will not be added to the set stored inside the SharedPreferences.

Other workaround that will work is to use the same SharedPreferences.Editor transaction to store another simpler preference (like an integer or boolean), the only thing you need is to force that the stored value are different on each transaction (for example, you could store the string set size).

I am trying to take advantage of an InfoWindowAdapter to provide custom content for the InfoView. I’m pulling down a JSONArray from my web service and adding the Markers but I’m not seeing how to pass the detail to the call back via a Marker.

In the Javascript API I was able to just set arbitrary marker info. I want to be able to pass info that can be used as conditionals for the custom content, example a marker.status string. So something other than title etc. The view will need a number of custom fields I need to pass in.

perhaps try adding your info or object to the marker as explained here: http://bon-app-etit.blogspot.be/2012/12/add-informationobject-to-marker-in.html

Edit: I also made a post that continues the previous to use the InfoWindowAdapter. Check it out here!

When using VisualVM for cpu-profiling of my application, I run into the error

Upon that, it copies all the class-files from the build path to the location I’ve started the application from.

I tried to find some information on it, the error code means (According to JVMTI-documentation):

JVMTI_ERROR_UNSUPPORTED_REDEFINITION_HIERARCHY_CHANGED (66)
A direct superclass is different for the new class version, or the set of directly implemented interfaces is different.

As this is the only Java-SE application I’m experiencing this problem with, it seems that it is somehow related to the libraries I’m using. The following are in my classpath:

Can anyone see a correlation between the libraries and the error? I really don’t have an idea anymore.

It looks like this can be caused by JPA. You can use Sampler instead of Profiler. Another possibility is to define root methods and instrumentation filter so that classes instrumented by JPA are not profiled by VisualVM. See Profiling With VisualVM, Part 1 and Profiling With VisualVM, Part 2 to get more information about profiling and how to set profiling roots and instrumentation filter.

Post conditions and class invariants on a component can only fail if the component itself is written incorrectly. Unit tests should catch all of these. It’s permissible, of course, to actually check them in production, but this isn’t necessarily worth the performance tradeoff.

On the other hand, preconditions can fail if the users of that component are incorrect. Tests on the component itself cannot check these, so it’s necessary to fail more actively so that those unit tests fail.

This question probably has been asked many times over here, without yielding useful answers. I’d place it here with a possible answer. Feel free to improve.

Question: How to setup popup like style of detail view, in side by side master detail view as highlighted in image below: 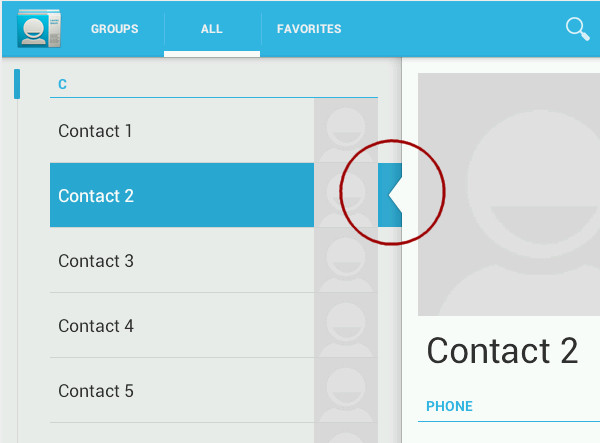 In this solution , I have used 9-patch background images, to define 2 kinds of backgrounds for list items. So, the selected(checked) list Item has a different background, as shown:

The list item layout’s parent view, is a class extending LinearLayout (can be any ViewGroup) and implementing Checkable. Hence, when ListView is set to choice mode, it can automatically check/uncheck this view. This checked state is then used by selector background assigned to this view :

This makes the background of list item view change automatically, without having to do it manually in code every time a list item is selected. 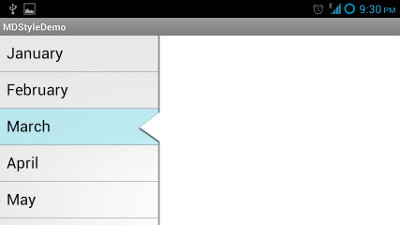