I made some kind of internal manual for a webapp that i am developing. I am using Spring Boot and Vaadin 14. How to implement a button that shows that document? The html doc is in my resources folder. I wonder if i am stupid. Or should i write my own controller for this?

A Vaadin application itself is a single dynamic HTML page.

The easiest way to include HTML formatted content (not an HTML document) is to use the Html component.

Note, when you use the Html component, you need to strip the <head> and <body> tags, as Html‘s purpose is not to show full HTML documents. The Html component’s content should be included inside a single root element – usually a <div> is used for this purpose.

However, based on your use case, I think the Html component will serve you well.

I am trying to start with Spark. I have Hadoop (3.3.1) and Spark (3.2.2) in my library. I have set the SPARK_HOME, PATH, HADOOP_HOME and LD_LIBRARY_PATH to their respective paths. I am also running JDK 17 (echo and -version work fine in the terminal).

Yet, I still get the following error:

Any ideas how to fix this?

So install Java 11 and point Spark to that.

The warning unable to load native-hadoop library for platform is quite common and doesn’t mean that anything’s wrong.

Is there a way to save JTable data to excel? I would like to save the data that I input from the program, from the table and then to a CSV file.

I would like to have it so that there is a button that will then save the inputted data from the GUI into the table and then to the CSV file.

This may help you:-

Method to write to a csv file.

For reading and showing it to a JTable you can use OpenCSV.

The question is how to rewrite a static HTML script embedding:

into a programmatic embedding which allows loading the script only on a certain condition.

The bounty is set for a description of how static/programmatic embedding differ from one another, specifically:

If you’ve already figured out how to detect your criteria then loading another script goes like this:

Check for the criteria, create the element, set its properties, add it to the document.

I took a shot at finding details on this mechanism. The best I could find was from MDN on the topic of script element async and defer properties:

The exact processing details for these attributes are complex, involving many different aspects of HTML, and therefore are scattered throughout the specification. These algorithms describe the core ideas, but they rely on the parsing rules for <script> start and end tags in HTML, in foreign content, and in XML; the rules for the document.write() method; the handling of scripting; and so on.

Unfortunately, I do not have the necessary familiarity with W3’s various HTML specs to turn it into plain English and it looks like it would take quite a bit of time to become that familiar.

I am running into this problem without finding a good solution. I tried every post that I found in Google but without success. I am isolating the problem so I can share you the exact point. I am searching an specific product in “mercadolibre.com” and I want to sort the list from the lower price to the maximum. To do so you can enter directly here and clicking over the option “Menor Precio”. 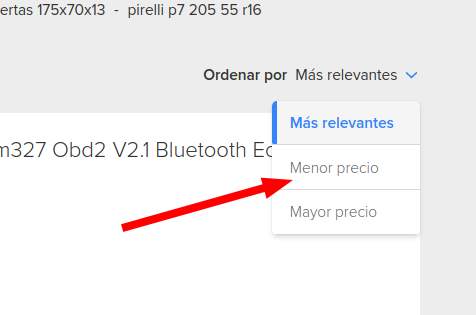 Doing manually this just works fine but with Cypress I am not being able to do that. This script just runs fine but the last step seems to have no effect.

Maybe Am I using a bad approach to refer the object?

I would retry menu until options become visible